“There was little time to think. I needed to see for myself, so I rushed to get there. When I arrived, the police and the fire brigade were already on the scene.” That was Stefan Backa, Swedish self-builder, describing his experience following New Year’s Eve. At the beginning of 2022, Stefan received a call from his neighbour. One dreaded by every homeowner who is away from home — his summer house built from straw and clay was on fire.

After a long night, the fire brigade was victorious, but the morning light revealed the damage. The entire roof was consumed by the flames and much of the house was damaged beyond repair. However, not everything burned. Curiously (or perhaps not so) the straw walls not only withstood the blaze, but were left nearly untouched.

Although straw has proven itself time and again as a reliable building material, misconceptions about fire hazard remain. EcoCocon has conducted rigorous fire tests in pursuit of certification, dispelling all concerns in the process. But while tests are well and good, real life cases of straw buildings burning are rare and valuable. A learning opportunity presents itself.

Let us then make the best of a bad situation, pick up a magnifying glass, and examine the case.

Before discussing what went wrong, let’s take a look at what went right, and what were the main ingredients of the house.

Halmbacken, or ‘Straw Hill’, was built to the Passive House standard, meaning exceptional energy efficiency. Stefan opted for bio-based materials wherever possible, although some compromises were made, such as the concrete foundation.

“When you choose too many ‘strange’ materials, the authorities may have some questions. It is better not to fight on multiple fronts,” Stefan laughs and continues, “not that it is a tough fight or anything like that, but foam concrete was a solid compromise. It is also more environmentally friendly, since it uses less cement per unit of volume.” Though weaker than regular concrete, it is quite insulating.

The walls were made of straw sourced from a local farm. Straw bales stack on top of each other like Lego. They are able to support the roof by themselves, or they can be filled into a supporting wooden frame. Stefan chose the latter.

The oak wood for the frame came from his own plot, and was processed on site using the Logosol's Big Mill concept. A method where an oak log is placed within an aluminium saw frame. The chainsaw then simply slides on a rail.

It is a well known fact that straw works best in combination with clay. However, not all clay is fit for the task. Stefan experimented with various mixes containing different ratios of clay, sand and straw. The walls were lined with several layers on both the interior and the exterior side.

Finally, the roof itself was covered with slate —  an old roofing material consisting of thin slabs of stone usually cut into squares or rectangles. The gaps between trusses in the ceiling were filled with blown-in cellulose insulation.

The roof was indeed the first to succumb to the flames. They chewed through the materials, which caved in and damaged the interior. “The cellulose insulation put up some fight, since it had been chemically treated,” Stefan describes, but adds that “it was the membranes that burned easily. We could barely find any trace of them. Both materials burned off completely.” The wood was not very thick, and gave in soon after.

It is still unclear which material was the first to catch fire, but we do know which one was the last. The straw walls were plastered with clay on both sides, but not on the top side facing the roof. When the top of the walls finally ignited, they burned merely 1-2 cm deep.

“If I had put clay plaster on top, it would have probably prevented the bales from igniting at all,” Stefan explains.

That is a stark difference from what most would expect, namely the straw flaring up into a blazing inferno and melting within minutes. However, before we assume straw has Targaryen blood running through its membranes, let's look at the science. The phenomenon can be explained by several factors that give straw the advantage.

When it burns, a charcoal layer is created which slows the spreading of the fire, and protects the inner layers. Straw also contains silica, which is a natural fire retardant. Combined with the fact there is little to no oxygen within the bales, these properties add up to a sturdy material that resists fire surprisingly well. But that is something we have already delved into in the past.

Although an electrical failure had been the initial suspect, it was later ruled out. An expert concluded the cause had likely either been a spark from the chimney or some work tool. “It is hard to say. The whole situation is a bit strange. There was also some wood on the plot that was burning outside the house.” According to the insurance company, it shared similarities with a few other cases that happened around that time. “Perhaps I fired up the stove a bit too much,” Stefan jokes.

10 years in the making

On the night of the fire, the owner lost 10 years of hard work. “The total building time adds up to about one and a half years. I was usually building during my vacations and sometimes on weekends,” he explains. Stefan is a research chemist by trade, with no background in construction. The Halmbacken project was born of his passion for architecture and the environment.

But the ‘stop-and-resume’ style of building has its disadvantages, and he suffered many setbacks throughout those 10 years. “Every time you stop, you need to cover everything, return the machines, etc. It slows the process down considerably. At one point, the walls leaked and needed to be rebuilt from scratch,” he reminisces. But Stefan was never deterred and saw issues as lessons to learn from.

After the incident, Stefan was looking to salvage and preserve what he could. The insurance company, however, would have none of it. The remaining structures were found to be damaged either by smoke or water, and thus set to be completely demolished. So, what next?

A new house, of course! But this time with a few upgrades. A natural home will rise from the ashes, with solar panels on the roof and a greenhouse. And since working with straw bales can be tough and laborious, Stefan is going with EcoCocon’s prefab solution. Hats off and best of luck to him.

If you are curious about Stefan’s self-building journey and his new home, you can have a look at his own website, where he is documenting every step in detail. 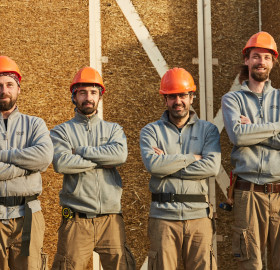 Construction work rarely conjures up very pleasant images. Carpenters who work with EcoCocon, however, beg to differ. Straw homes are just as much of a joy to build as they are to live in. 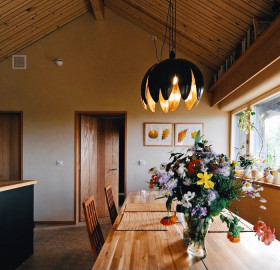 Living in a warm, cosy cocoon: 10 things we love about straw homes

For many of us, building a house is one of the biggest decisions of our lives. But navigating through the world of possibilities is not always easy. Pioneering natural construction for more than a decade, building with straw has really become part of our DNA. As straw homes offer a completely unique experience, there are many reasons to love them. Here are the ones that come top of our list: